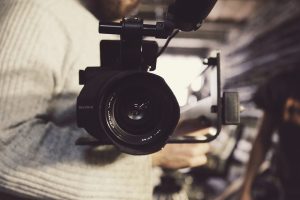 In a world that is now more media reliant than ever and where media is an increasingly manipulative tool (fake new, Cambridge Analytica, Trump, Facebook etc). It is imperative that young people are educated in Media Studies. This exciting and vibrant course offers students the opportunity to study all areas of the Media including film, radio, magazines, music videos, newspapers, advertising, marketing, video games, TV, and online Media. Students will learn to critically analyse texts from each industry area and also create texts for the NEA controlled assessment unit, developing skills learned and putting them into practice. A level Media allows students to learn transferable skills that would be invaluable in any professional career or further education route of study and attain ability to explore, analyse and evaluate information and successfully communicate complex ideas.

Component 1 (Section A) Media Products Industries & Audiences: Written examination 2 hours 15 mins 35% (90 marks) Learn how to analyse and critically compare how media products, including products outside the commercial mainstream, construct and communicate meanings through use of media language and audience response.

Component 1 (Section B) Understanding Media Industries & Audiences Develop knowledge and understanding of key aspects of media industries including the significance of ownership and funding, the role of regulation and the targeting of mass and specialised audiences exploring issues such as, why is a film given a 15 certificate rather than an 18 and why does a film get banned?

Component 2 Media Products & Forms in Depth:
Written examination, 2 hours 30 mins. 35% (90 marks)
Study three media forms in depth: Television in the global age, magazines – mainstream and alternative media, blogs and websites – media in the online age. You will explore the three media forms through close analysis of the set products comparing their use of media language and the representation they offer in relation to relevant social, cultural, economic, political and historical contexts as well as exploring the role of media industries in shaping media products.

Component 3 NEA – Cross Media Production. 30% (60 marks)
Apply the knowledge and understanding skills learned to create cross media production consisting of a moving image product and two print productions in a response to a set brief provided by the exam board, along with a statement of aims.