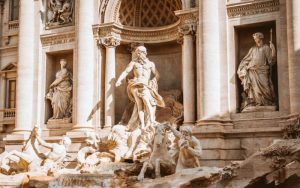 This A Level is open to any students, no matter what your GCSE subjects. All texts are studied in translation, so no knowledge of any language other than English is needed.

Classical Civilisation investigates the millennium between 800 BC and 200 AD when some of the most important intellectual innovations in human history happened. You will read texts well over 2000 years old, looking at battles for power in the classical world and getting inside the minds of extraordinary individuals, as well as looking at their art and architecture. You will learn to develop an independent, critical approach to literature, history and politics and to form strong analytical skills. The study of A Level Classical Civilisation can often lead to the university-level study of Classics, Drama, English, History, History of Art, Philosophy, Politics, Law and more. Classical Civilisation is listed on UCL’s list of preferred A Level subjects and it is also listed on Trinity College, Cambridge’s list of Suitable Arts A Levels.

Unit 1: The World of the Hero – 40% of the A Level. 2 hour 20 minute exam
In this unit you will study two foundational texts of Western Literature – Homer’s Odyssey and Virgil’s Aeneid. In this unit you will look at how heroes are presented in Greek and Roman literature and how this is different from the modern super-hero, or key worker hero. Pride, arrogance, magic, fighting off monsters – these were all traits of an ancient hero. You will come across the underworld, the Cyclops, witches like Circe, as well as the gods like Zeus (Jupiter), Athena and Juno.

Unit 2: Greek Theatre – 30% of the A Level. 1 hour 45 minute exam
In this unit you will study three Greek plays – two tragedies and one comedy. The Tragedies are Oedipus Rex and The Bacchae. These plays are by two of the greatest playwrights in history – Sophocles and Euripides. They cover themes such as free will, hubris, personal/national responsibility, and sexuality. The comedy is called Frogs by Aristophanes. It concerns a trip to the underworld to bring back a dead poet to save Athens – lots of fun along the way.

Unit 3: Greek Religion – 30% of the A Level. 1 hour 45 minute exam
In this unit you will study the Olympian gods and how they were worshipped by the Greeks. This unit is a mixture of history, archaeology, philosophy and ethics, as well as literature. It looks at the role of gods in sacrifice, daily living, national politics and sport. It also looks at how this was challenged by philosophers and atheists.

The departments run a Rome trip. As part of your A Level course we will also visit the British Museum and attend theatre productions as and when they are produced. Classics students are also invited History Department trip to the USA.

Tweets by LongsandsSixth
Go to Top